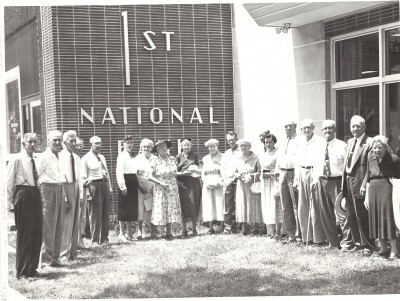 First National Bank Building dedication, circa 1963
The 20th Century was a tumultuous time for the banking industry. The stock market crash of 1929 and the Great Depression that followed forced many banks to close completely. Thanks to sound management and strong support from our customers, The First National Bank of Arenzville weathered that financial storm without incident. The Bank was never closed to business except for the government mandated bank moratorium of 1933.

We hope you’ll consider becoming a part of the First National Bank of Arenzville Banking Family. We’re locally owned and locally operated. We understand the unique economic climate of the area and we pride ourselves on friendly, personal service. Find out what it means to experience “Blue Diamond Service from Your Hometown Team.”

Important information about your account! Click here for the latest news and alerts regarding account safety, protecting your identity and maintaining your financial health. Make sure to check out Banking Alerts from First National Bank often. Learn More ›

You can estimate your loan payment using First National Bank's handy loan calculator! This is a quick and easy way to see how interest rates and the term of your loan will affect your payment. Click here to use our Loan Calculator ›